World Fair Trade Day Outside & In

Kicking Off WFTD
The band was playing and the banners waving - slightly sad it was for another celebration altogether! 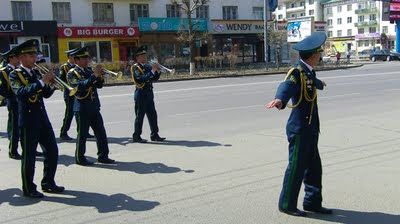 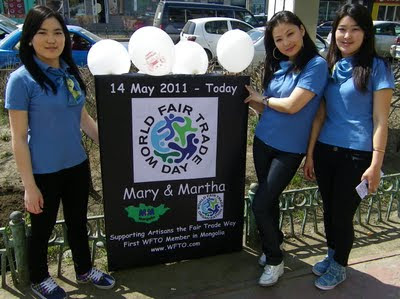 The Good News
Shoppers came early, few knew about World Fair Trade Day and the fight against poverty but they were very willing to listen and we had our best sales day since last August.
Remembering WFTD
Each customer received a Mary & Martha "Lost Sheep" felt fridge magnet to remind them of two things in particular:
1. The Role of Fair Trade
2. The Way Mary & Martha is fighting poverty through dignified work 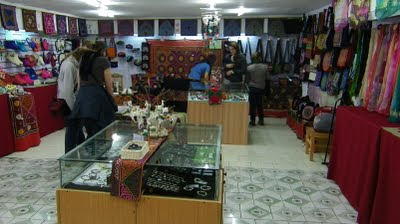 Another Year Maybe
We failed to generate any TV or newspaper interest this year ... but we live in hope!
A BIG THANK YOU to everyone who supported WFTD yesterday in Mongolia.
Posted by Mary and Martha No comments:

World Fair Trade 2011 has the theme
“TRADE FOR PEOPLE – Fair Trade your world”.
World Fair Trade Day this year is 14th May and Mary & Martha are grateful that we can officially support WFTD in MONGOLIA. 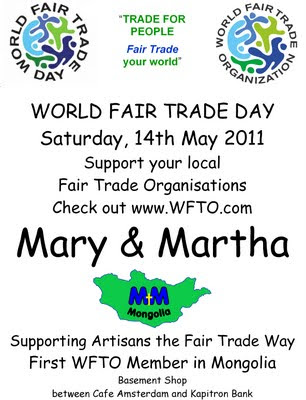 We'd love to see you and to answer your questions on Fair Trade
and to encourage you to support local Artisans.
Saturday is so close ... come and join us!


Posted by Mary and Martha 2 comments:

Wednesday - Tax consultation day.  About 50 Mongolian / Joint Venture / Foreign Owned companies were invited to present to Mongolia's Senior Tax Officials to say what we thought of the Mongolian Tax System.  We realised we are "small fry" in a big pond but were given the opportunity to speak for 10 minutes very early on in the meeting.  We were the only fully foreign owned company to speak and .... 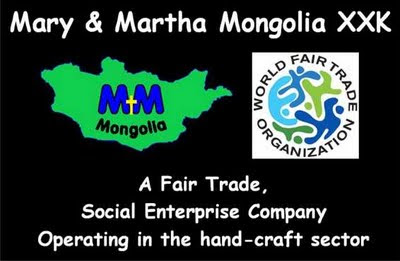 We were able to introduce the idea of Fair Trade and Social Enterprise - both basically new concepts to the Mongolian business environment.  We are just very grateful that our Tax District "Bayanzurkh" chose us to represent their district.

We asked what we thought to be a few minor questions in relation to "stamped" receipts, and their validity, trying to extract VAT receipts from 80% of businesses and how we could cut down on the masses of paperwork involved in tax returns.  To our amazement it set off a kind of chain reaction - we were not alone and seemed to have hit on sore points most companies had in relation to tax business.

During the session we were called out of the room by officials and were surprised it was so that a TV station could interview us - to find out more about our company and our views on the tax system.  We have been blessed today with wonderful opportunities to highlight Fair Trade and Social Enterprise ahead of World Fair Trade Day on Saturday 14th May.

We are still amazed that being so small we were still selected to attend.

Posted by Mary and Martha No comments:

It seems we've graduated as a company.  We have received our certificate for being "Good Tax Payers in 2010". 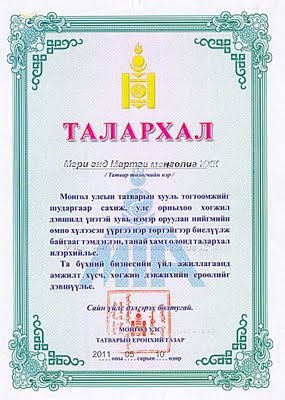 However, as we know pride comes before a fall so we'll probably be notified soon that we are due for an audit covering the first 4 year's of trading.
The event itself:
Bizarre - first we were summoned to attend an event for which the date and location seemed unclear!  However, in true Mongolian style all was finalised and we pitched up to an event outside a large supermarket.  We spoke to several officers - they know us well in the tax office because of all the oddball questions I have.
The stage was set with a traditional music group and children dressed as tax officers.  Seven of our local tax officials in full uniforms, the ladies in large peeked hats and standing in rather high, high heeled boots, the men looking rather imposing, all sang to the assembled invitees.  I could not imagine tax officials in the UK or USA knowing it was part of their job description to sing to "Good Tax Paying"  companies outside of a supermarket.
Certificates were then presented to companies receiving recognition.  We left empty handed as my translator said the event was over.  Must have miss understood about our role in the event.
My translator's English is getting far too good at the expense of her Mongolian!  It seems we left at "Half Time" - but we were able to receive our certificate in a local hotel car park a few hours later.
Next on the agenda:
An invitation to the main tax payer's celebration to talk for 10 minutes on the benefits and difficulties of the Mongolian Tax System - should the receiving of a certificate influence what we say?  Seriously, we will be introducing the concept of a Fair Trade, Social Enterprise company for inclusion as a new class of company in the tax system.  More later ....
Posted by Mary and Martha No comments:

The good news is exporting from Mongolia has gone ON LINE.  Yes, we can now complete our data input on line and collect our export papers two hours later ...

It is at this point that the momentum drops.  Every process is as strong as its weakest link.  The customs process at the Main Post Office is the weak link in this case.  Not only are the rules relating to product category, invoicing style, number matching to 1 100th of a MNT (0.000008 of a USD) continually open to different interpretation BUT also the DESK Service involves 3 people processing the same application.  The connection between desks seems to be by a rather dodgy internet connection - not even by standard network.  Last visit the system continually crashed - taking over 3 hours to complete our process paperwork.

But sometimes the quirks and vagaries come out positive.  For once we did not have to take every one of our 75 items out of the well packed box so the customs official was absolutely sure we were not shipping "irregular" gold bars.  Further more, although practised "queuers" we were not embarrassed one bit when a Post Office official recognised us and forced us to jump the que, I think to gain merit.

However, due to the time taken by customs we missed the pick up slot for the goods to make the next day flight so momentum was lost again while the said box stewed for the next 4 days.

We give thanks for having a GOOD EXPORTING DAY. 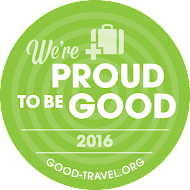